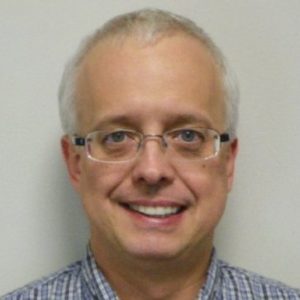 Jeff Emminger, Theta 1291, was initiated in the Fall of 1985.  He graduated with a BS in Electrical Engineering (1987). While at Purdue Jeff was also a member of the Alpha Gamma chapter of Alpha Phi Omega National Service Fraternity.

Jeff is a registered PE in the State of Indiana (since 2002) and is employed by Ingersoll Rand as an electrical product engineer for Trane variable air volume terminal units (since 1998). Prior to Trane, Jeff worked for the US Navy as a Civilian Electronics Engineer and, after a privatization of the facility, as a Staff Engineer with Hughes Aircraft (Raytheon).  Jeff also holds an MS in Electrical Engineering from IUPUI. (year???)

Jeff is married to Debbie, his wife of 25 years, who is a Purdue alumnae and Alpha Delta Pi sorority member.  They have three daughters; Karen, aged 22, a senior at Purdue, Gamma Phi Beta VP Recruitment and President; Sarah, aged 19, a sophomore at Purdue, Alpha Omicron Pi Historian; Rachel, aged 16, a junior in high school. The family resides in New Palestine, IN