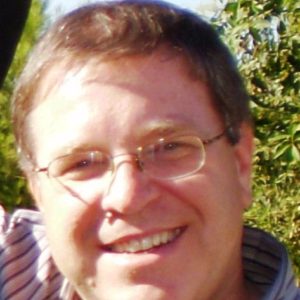 Brian M. Coleman, Theta 1114 and Alpha Eta 355 Theta, was initiated in the Fall of 1978 and in 1986 at University of Colorado.  He graduated with a BS in Consumer Family Science (1982) and holds a certificate in Geographic Information Systems (2008).  Brian also serves as an adjunct GIS instructor at Front Range Community College, teaching GPS Field Studies and Cartography.

Brian is currently Solution Engineer for International Magnaproducts, which is a distributor of magnetic materials worldwide.  He is also a sales engineer for Juniper Unmanned, a UAV company specializing in training and providing services for safe, effective and compliant UAV flight operations.

Brian lives in Broomfield, Colorado with his wife of 28 years, Amy, who is a Purdue alumnae (1983).   Their two sons, Aaron, aged 26, and Noah, aged 24, have both completed college.  Aaron is a Deputy Sheriff with Boulder County and Noah is a Warehouse Lead in the Beverage Industry.  We also have one grandson, Case by Noah and CC.  Brian and Amy are members of Risen Savior Lutheran Church.  Brian is an Entered Apprentice with Mosaic #184 Masonic Lodge in Eastlake, Colorado.

Brian has been involved with the recolonization and successful re-chartering of the Alpha Eta Chapter of Theta Xi at the University of Colorado since 1986, serving a chapter advisor for 25 years.  He has also served on the CU Alumni IFC Board, been a Grand Lodge Director 1999-2003 and Great Plains Regional Director for Theta Xi.  Brian has received two Distinguished Service Awards from Theta Xi and Outstanding Chapter Advisor from the National Fraternity.  He is currently a member of the Alpha Eta Alumni Association and the Chapter Ambassador for Alpha Eta Chapter to the National Fraternity.

Brian is also a longtime Scouter, serving as a Scoutmaster, Chartered Organizational Representative for several Colorado scout troops.  He has developed Land Navigation national course curriculums for training at Philmont Scout Ranch and two National Jamborees, 2010 and 2013.  He has also led two contingent troops to two World Jamborees, 2007 in the UK and 2011 in Sweden.  He completed Wood Badge training in 1986 and was awarded the Silver Beaver in 2009.